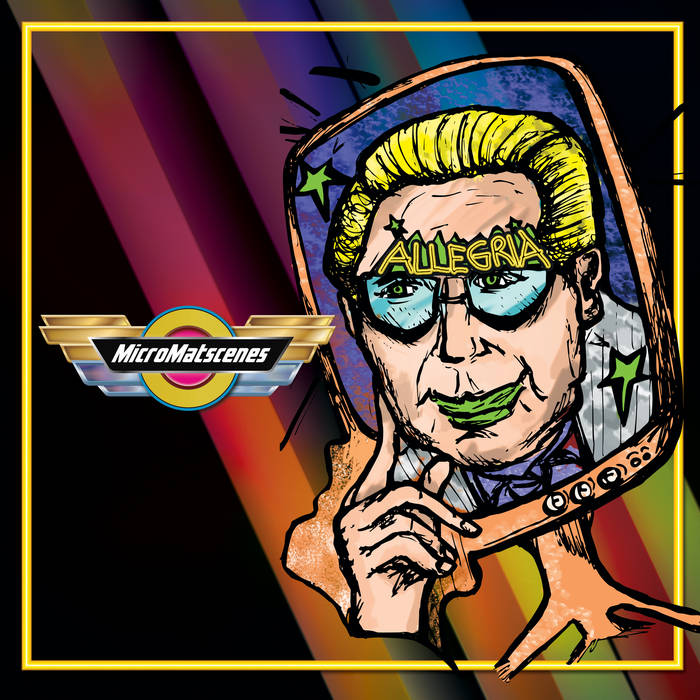 Gab Manette If you are a fan of retro-inspired melodic synthpop like me, Allegria is a no-brainer. Memorable and catchy melodies, funky basslines, tasty drumfills, this album has it all! The arrangements are gorgeous; you can tell MicroMatscenes puts a great deal of care in choosing the synths and percussions that bring his music to life. He makes them shine in every track, all delivered in a pristine mix. Bravissimo! Favorite track: Faded Photos.

David Rotenburger All the things great and small that we loved from the 80's is brought back to life with this wonderful album of retro synth glory! Favorite track: Faded Photos.
more...

His strenght was the ability to appear as one of us (even if he was not, obviously), acting like a simple man with his weaknesses and doing embarassing gaffes involving the quiz contestants or other colleagues

I decided to dedicate the cover art and all the whole album concept to this figure because he’s enough iconic to crystallize the Italian pop culture of a certain period, and in my case it’s the late 80’s/early 90’s.

ALLEGRIA is a love letter to things my generation (the “Millennials”,) can still remember vividly, like the Fiat UNO, photo albums in rainy afternoons, mid 80s movies like “Rocky IV”, the struggles at home for the dominance over the TV, because there was no other way to play our favorite videogames or for our moms to watch their favorite soap operas.
All these thing are part of the collective memory of a time that was surely saturated with bad mass culture, thrash TV shows, bad politics and a lot of social problems, but here is the magic of the Retrowave phenomenon: make good out of the bad.

From an artistic point of view this album is more melancholic than SCENES, but it’s more organic and “alive”, following the idea of recreating a “VHS” atmosphere, with faded colors and glitchy graphics. Of course there are upbeat moments and catchy tracks, but while “Saturday Morning” from SCENES was a child’s happiness, even the light side of ALLEGRIA has more to do with adolescence and “fear” of being too happy in a world that seems too fragile; however there’s always our inner strenght to guide us to positivity and success, when we clench our teeth and say “no pain”.

… Then there’s “Tra le fiamme e le stelle”, my first track ever with vocals. It’s a typical 80s style pop song, with a modern twist on the metric, very similar to a certain “indie” genre very popular nowadays. A lot of modern pop artists are going in the vintage direction, but in most cases they fail, just stealing the aesthetics from Retrowave genres without recreating the true feel.
The song is about a one night love affair, but even in that kind of relationship it’s hard not to put our heart, sometimes.
The short intro is a showcase of some Future 80’s Records artists’ songs coming out from an old FM radio, then a nice speaker introduces the song like a “new entry on the weekly chart” debuting at number 1… a little too pretentious? Nah, that’s just for fun!

I want to thank all the Synthfam friends that supported me during the creative process, showing enthusiasm and love since the release of the previous EP, then the equipment, software and plugins without which I would have done nothing (Logic Pro X, Arturia, Beatskillz), my friend Francesco Di Marco, owner of “8 Herz” studios in Viterbo, who oversaw the vocal recordings for “Tra le fiamme e le stelle”, and Luigi Lusini, friend and mastering engineer who made everything sound great.
Thanks to my friend Jennifer Venanzi for creating with her fantasy, hand and pencils the cover art and my new profile images, and Chiara Bruti of “Openart” in Viterbo, for the work of digitalization.

Last but not least, thank you Dan (Midnight Driver) from Future 80’s Records for believing in my ideas and music.

The biggest kiss to my wife, who always accepts my moments of productive isolation. I love you Martina.